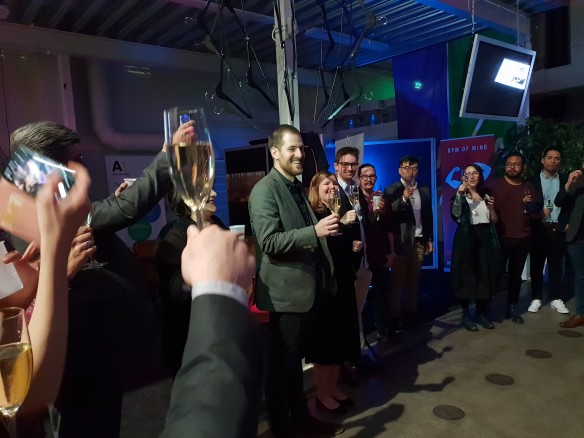 It is a strange feeling to know that finally the effort of years is paying-off and your studies are officially over; to me, this means no more exams, studying, or homework… ever. As good as feeling as this is, the feeling of melancholy is inevitable. I studied the larger part of my degree at Design Factory and Startup Sauna, therefore celebrating my graduation at the neighbor’s was suitable; While I never spent nearly as much time at Urban Mill as I did the others, they are all somehow an alternative family within Otaniemi. 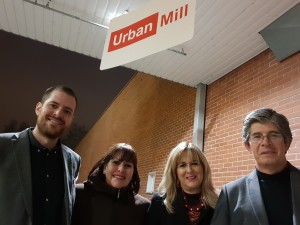 The party started a few days earlier when we started planning the event; we were expecting close to 70 people, 30 of which would join a family/adult dinner of which around 15 would join 40 friends at a later dance party. In the end, this was quite accurate, and we peaked at around an estimated 65 guests. The dinner party included Mexican food mixed with side-dishes, salads, appetizers, and some bubbly-wine which was prepared beforehand and served to the guests after a small toast from a few brave ones. The dance party focused more on music, lights, and a good atmosphere. 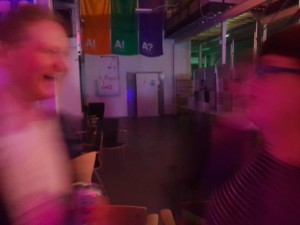 Among the guests were close family members, distant relatives, Mexican relatives, friends from my degree, from other degrees, from other schools, and from random origins. This mixture worked amazingly as we saw people from different origins mingling with each other. The food was widely appreciated and the dancefloor had people dancing Latin music, oldies, and house. It is necessary to mention that this party would not have been as big a success as it was without the help of Aalto Takeout who gladly lent us a set of party lights and a massive set of stereo speakers and subwoofer which gave us that punch we needed.

We had the possibility to reorganize the space as we wanted but we chose to keep most things as they were. The way the Urban Mill is distributed allows us to have many different little spaces for people to sit at which somehow give the feeling of a lounge bar with a somewhat industrial touch to it. The dance floor was set on the stage, lights shining from the floors above, and a large cloakroom set at the entrance, perfectly replicating a dance club.

Text by Rodrigo Prieto Padilla, who was celebrating his graduation. Photos by Reino Laukkanen.

The use of the facilities at student-friendly price was offered by Urban Mill and TEK’s Uusimaa Regional Office, which jointly develop and pilot new types of community space services in the Otaniemi area.

Read below Rodrigo’s 6 points for foreign students and graduates to get a job in Finland: END_OF_DOCUMENT_TOKEN_TO_BE_REPLACED

We are Pia Liepe and Kai-Ti Wu, 2015 pioneers from the EU Pioneers into Practice program who is working with the Department of Real Estate, Land use Planning and Geoinformatics in Aalto University. The experience working in the Urban Mill could be seen as a journey of inspiration. We ourselves have very good experience in sharing our own knowledge using the space and facilities. We would definitely encourage more interdisciplinary events to be held in Urban Mill.

The open spaces and facilities for open discussions were very user friendly, during the one month work in Aalto Uni, we were very lucky to get inspired from this innovative co-working, meeting space. We would share our experience working in the Urban Mill in three different occasions:

Tutoring in the System Thinking 1 Masters Class from the program of Creative Sustainability: 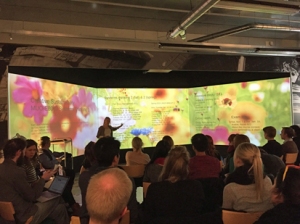 The Urban Mill is a great place to put together students from different disciplines to work together. The 3D Theatre (Urban Cave) could contain 30 students with enough space to stand up and stretch themselves and it also provides a lot of space for private group tutoring events. Presentations could be clearly presented throughout the room.

Participating in the Helsinki Uusimaa Regional Pioneers into Practice Workshop 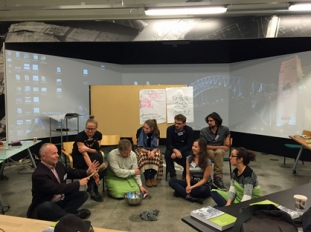 On 15th of October the Pioneers into Practice workshop was held in the Urban Mill. 15 Pioneers from all around the world working in the Helsinki region met together in Urban Mill for the workshop. The program’s regional councils presented the horizon of Helsinki’s low carbon development strategy and encouraged the pioneers to work together for a solution. We had a pleasant experience working with the facilities provided in the space and was able to come up with creative presentations. The group in the picture was presenting their solution with the scene of doing sauna together. Which fits to the context to be a proud Finnish style of communication!

Pioneers into Practice is Climate-KIC’s professional mobility programme. Low Carbon Economy professionals from education, research, enterprise and administration join and put into practice their expertise to create new products and services in the field of the climate change. See http://www.climate-kic.org/programmes/pioneers

Download the book from this page or pick up a printed book for free from Urban Mill. See instructions below. 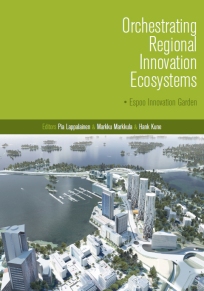 The 378-page book published by Aalto University, Laurea University of Applied Science and Built Environment RYM Oy, gives a snapshot of developments in Espoo Innova­tion Garden—state-of-the-art at the time of publication. It shows in 27 articles what’s happening at this moment —through the work of the authors—but also points to the future, as their work continues within the Energizing Urban Ecosystems re­search program.

This book is a must for anyone interested in understanding how Espoo Innovation Garden functions as an orchestrated regional innovation ecosystem. It is a good illustration of how ecosystems work in practice, presenting the results of many months of cross-border and interdisciplinary teamwork, which is now ready to be shared with a wider public. It is a commendable journey, with many lessons for innovators across Finland and Europe to inspire journeys of their own.

“Orchestrating regional innovation ecosystems is an emerging science—and an art. So it is important to research its secrets, learn how they work and why, and thus come to understand how to better maintain and improve them. That is what the many authors of this book—researchers, practitioners, businesspeople and politicians—have done. We must continue to learn how orchestrating these ecosystems creates opportunities for business, universities and local government, and enhances the quality of life of our citizens. The work accomplished here is exemplary and has much to offer to other regions in Europe.”

PICK UP A PRINTED BOOK FROM URBAN MILL, which is one of the cases described in the book. Location: Betonimiehenkuja 3E, Otaniemi, 02150 Espoo, FINLAND (Monday to Friday 9 am to 5 pm)  See Map

Read the foreword of the book written by Jukka Mäkelä, Mayor of the City of Espoo and Ossi Savolainen, Regional Mayor of Helsinki-Uusimaa Region:

END_OF_DOCUMENT_TOKEN_TO_BE_REPLACED

We have two office rooms available until the end of July. If interested, contact lars.miikki@urbanmill.fi or by phone Lars Miikki, +358 40 503 6630.

Step-by-step guideline if you want to visit, live and work in Espoo. Includes Espoo news and events (in English).