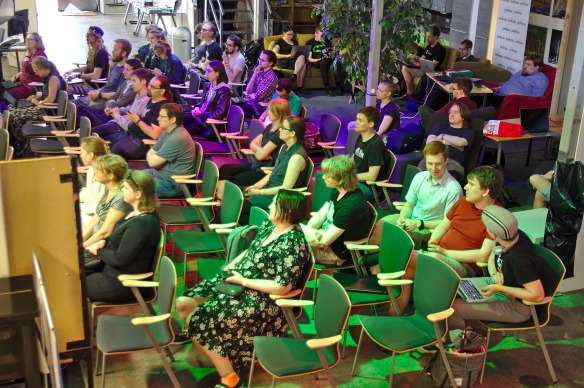 Graffathon is a weekend-long computer graphics hackathon, aiming to introduce graphics programming and demoscene culture in a beginner-friendly way. At Graffathon, the goal was to create a demo, i.e. a computer program that produces a non-interactive multimedia presentation. 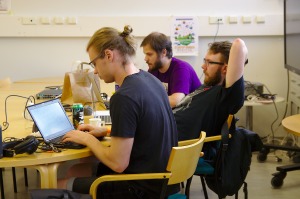 Participants created demos in teams of one to four people. At the end of the event, the demos were shown on a big screen for everyone to enjoy. The event helped beginners to get started with some presentations and workshops, and organizers were available to help with coding.

Graffathon has been organized every summer since 2013, and this year was the second time it was held at Urban Mill. The venue suited the event very well, providing many spots for creative teamwork, and enough space for the demo show at the Stage. In total, there were 63 participants who created 28 demos – you can watch them on Youtube here!

Graffathon 2019 was arranged 7.-9.6.2019 by Digital Media Club of Aalto University DOT. It is an association targeted for students who are interested in computer graphics, demoscene, game development, programming and doing creative things with computers in general.

Most members of DOT are studying at Aalto, but some come from other schools in Helsinki area or have already graduated. For more information: http://dot.ayy.fi/in-english.html

Due to a change in our business model, our premises are unfortunately no longer available for rent.

Step-by-step guideline if you want to visit, live and work in Espoo. Includes Espoo news and events (in English).